The Good Samaritan Laws that every State adopted protects rescuers from being sued by a victim during the act of caring for their life and welfare during an life-threatening emergency. It is fairly common to hear of people suing others because their ribs broke or developed pneumonia and staying in the hospital for several weeks after being resuscitated. If they won, the rescuer would be punished by paying for the victim’s medical bills or paying them an ungodly amount of money as a way to compensate for their current state. This is shameful and something, in my opinion, truly American. Folks, this was not how it used to be. Click here to read more about the development of the Good Samaritan Laws in the United States. 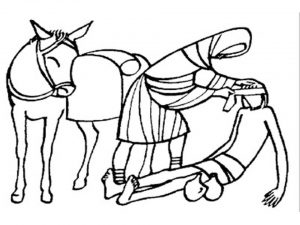 Have you ever wondered where the term “The Good Samaritan” came from? The term came from a story in the Bible. STOP! Don’t crucify me yet. Read the story first and understand why the laws to protect rescuers were titled “Good Samaritan Laws”.

To lay the background, the Good Samaritan was a parable or story recorded in the Bible and was told by Jesus Christ to describe how people should treat others. In history, Samaritans were people who lived in a province or region north of Judea in today’s Israel during Jesus’ time when the Romans occupied the area. Samaritans were half- Jews and were considered undesirables or dirty by their Jewish neighbors. In fact, at that time, Jews were recorded as having to travel around the region of Samaria to get to another city further to the north. They were willing to extend their travel time by days just to avoid the Samaritans.

Before the parable began, Jesus told the crowd gathered around him to ‘love thy neighbor as thyself’. Someone then asked, “Who is my neighbor?”
And Jesus answering said, A certain man went down from Jerusalem to Jericho, and fell among thieves, which stripped him of his raiment, and wounded him, and departed, leaving him half dead.

But a certain Samaritan, as he journeyed, came where he was: and when he saw him, he had compassion on him and went to him, and bound up his wounds, pouring in oil and wine, and set him on his own beast, and brought him to an inn, and took care of him. And on the morrow when he departed, he took out two pence, and gave them to the host, and said unto him, Take care of him; and whatsoever thou spendest more, when I come again, I will repay thee.

Before anyone else leaves comments or nasty grams about Jesus, Christians, Christianity, God, gods, religion and stuff, for a moment, focus on the story and the morals and values in it. The story had aspects that we have in our own society. We have religious folks who we might think are pious (“Priests”) but are in fact the opposite of what they portray in their community. They are apathetic. We also have those born of high status from skill and birth or cast as heads of communities and representatives of peoples from government and on (“Levites”). However, they care only about themselves. They may even hate others. But thankfully, we also have in our society those who do care about people and would share their own stuff (dressed his wounds) and then some (carried him to an inn, fed and healed him, and payed for extra care given… even if they have to return).
Which one among the three should we be like? Which now of these three, thinkest thou, was neighbour unto him that fell among the thieves?

This is the Good Samaritan- it is anyone and everyone who should genuinely care about others. And this ladies and gentlemen is the basis for the law that protects rescuers and an encouragement for all to return our society towards a caring and loving community.

Thank you for reading!

Read other topics in our blog. Click here.
To register for an upcoming course with us, please click here.
Need to request a group/ corporate course? Click here.
Check out our featured products at our store.

One Reply to “Origin of the Good Samaritan Laws”

CURRENTLY UNAVAILABLE UNTIL FURTHER NOTICE. PLEASE CONTACT OTHER INSTRUCTORS IN YOUR AREA.

*(PLEASE GO TO OUR ”COURSE REGISTRATION” TAB FOR MORE DETAILS)